This is really my twin's Enjy's place, not mine. S/He does not have any other place in this world. S/He was miscarried at age four months in the womb. We were twins and made to be together for years and we were torn apart within seconds. This is the place where I go to talk to him/her and about him/her. Anyone who has lost a twin in utero or very early is very welcome here to read and share.
Anjy

...my twin had lived?
Sometimes I try to imagine what life with my twin might have been like.
Then I look at the picture I have posted before (a watercolour I did at age 4) and think of my sister (left) always a bit more outgoing, more adventurous than me. 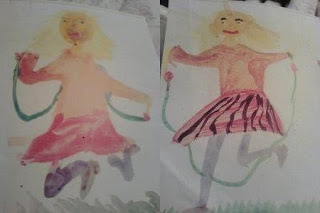 Would our younger siblings have been born at all? I think so. Our mother conceived so easily our father once said he only had to look at her lovingly and she became pregnant.
But our parents may not have had a divorce. They may have had too much to do with four of us to become hippies and turn our family into a great aquarian experiment. We may have gone to a regular primary school, not the Montessori one I suffered at for four years. We still would have had much the same way to school, though, and we would have argued about which dog we wanted to have.

Not so much different from how it was.

We would have graduated from school together and suddenly discovered we wanted to be together again and go to the same university. Would I still have studied theology? I think I may but probably not Catholic since becoming Catholic was part of my searching for you everywhere without knowing. Our parents may have stayed with the Protestant Church, we would have gone to Confirmation and I may have studied to become a pastor. You would have cancelled your studies - maybe geography - after two years and become a flight attendant. Yes,you would! Always with both feet in the air while I am trying to have one foot on earth and one in heaven.

Would I be married to the same husband? Probably not, but maybe to someone very similar in character. A fellow theologian, perhaps. We would have shared a comgregation.

You would have flown around the world and come to visit us often. You wouldn't have married but you would have felt like my children were yours, too, and you'd have been godmother to all of them (three at least, maybe four like I have now, or even five). They would have adored you.

Your favourite country would have been...

Okay, South-Africa. You would have sent us pictures from Krüger Nationalpark and always dream of finding a South-African husband. I would have been jealous of all your boyfriends.

I would have been worried your plane might crash all the time...

Now, at age 50+, you would have thought about retirement with work conditions at Lufthansa becoming tougher every year. I would have wanted you to settle down near me but been afraid to say so for fear to drive you away. Because, of course, you would have been talking about moving to...

I would feel a bit abandoned by you, now, because you'd mostly be away and life would be getting more exhausting (it really is) and I would think we should be more together and help one another.

Not so much different from how it is.

We would have talked on WhatsApp daily, sometimes by the hour. You would have said "WhatsApp is really almost like being in the womb together again. We don't talk novels but we're always in touch."

Not so much different from how it is...